Home Featured News FGCU’s Carpenter and Svensson Nominated for the 2015 NCAA Woman of the... 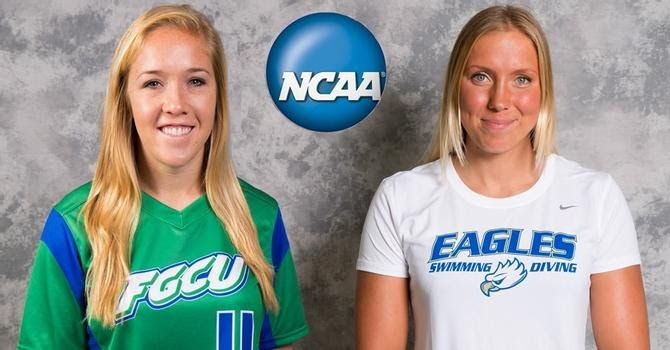 INDIANAPOLIS – After the conclusion of historic careers at FGCU, softball standout Kelsey Carpenter and swimming & diving program record-holder Emma Svensson have been nominated for the 2015 NCAA Woman of the Year award.

Now in its 25th year, the Woman of the Year award honors graduating female college athletes who have exhausted their eligibility and distinguished themselves throughout their collegiate careers in academics, athletics, service and leadership.

From the top 30, the selection committee determines the top three nominees from each division and announces the top nine finalists in September. The NCAA Committee on Women’s Athletics then chooses from among those nine to determine the 2015 NCAA Woman of the Year.

The 2015 NCAA Woman of the Year winner will be announced, and the Top 30 honorees celebrated, at the annual award ceremony Oct. 18 in Indianapolis.

Carpenter (Oviedo, Fla./Hagerty HS), who was inducted into the FGCU Hall of Fame in March, earned a place on the Atlantic Sun Conference Softball Academic All-Conference Team for the third-straight year. A 2015 President’s Scholar, she also maintained a spot on the President’s List or Dean’s List every semester at FGCU, and was a recent co-recipient of the prestigious Eagle Scholar-Athlete Award, which recognizes the ability of the winner to combine athletic and academic success (minimum 3.20 GPA) with community service.

The exercise science major has held a 3.94 GPA while being a two-time recipient of the Robert and Bette Batson Scholarship, which only two students receive in the Exercise Science program. The last two years Carpenter has served as team captain and also became the founding president of FGCU’s Fellowship of Christian Athletes. While maintaining a spot on the President’s List or Dean’s List every semester, Carpenter has volunteered 60 hours each for Habitat for Humanity and Summit Student Ministries.

A four-year starter, Carpenter has earned selections on the A-Sun Second Team (2013), A-Sun First Team (2014), A-Sun All-Tournament Team (2014) and this past year was tabbed as the A-Sun Preseason Player of the Year. Last season, she led the A-Sun with a batting average of .432. Her exploits at the plate continued as she led the Blue and Green with 51 RBI, 76 hits and 10 doubles. Carpenter’s .458 batting average with runners on base and her .505 on-base percentage were crucial in leading the Eagles to the A-Sun Championship final.

In previous seasons, Carpenter has been named to NFCA All-South Region second and third teams, in addition to being a College Sports Madness A-Sun All-Conference First Team choice.

Svensson (Upsala, Sweden/Celsiusskolan), who was also inducted into the FGCU Hall of Fame alongside Carpenter, has maintained a 3.89 GPA as an economics major and an honors student at the same time as she has set multiple program records in the swimming pool, and was the fellow co-recipient of the prestigious Eagle Scholar-Athlete Award this past year.

The Swede became the captain of the FGCU swim team in 2013 and has been a mainstay on the FGCU’s President List for the last four years. Svensson was a research assistant for the FGCU Honors Program last year while having a concentration on the Eurozone crisis and finding business applications of calculus and behavioral economics. The mathematics minor has spent her time volunteering in the community through the FGCU Actuarial Science Club, Hope for Haiti and Mesina Children’s Hospital.

As a freshman in 2011-12, Svensson became the first Eagles’ swimmer to qualify for the NCAA Championships. She was named a Mid-Major All-American and earned CCSA All-Conference honors in addition to being honored as CCSA’s Most Outstanding Female Freshman Performer of the Championship Meet.

Her dominance continued throughout her sophomore campaign as she was selected as the NCAA Elite 89 Award Winner, again qualifying for the NCAA Championships while maintaining a 4.0 GPA and also notched her first CCSA Swimmer of the Year award.

This past season, the Swedish standout continued her spree of shattering records at the 2015 CCSA Championship meet, breaking her own mark in the 50 free with a CCSA and FGCU-program record time of 21.98. She was named CCSA Women’s Most Outstanding Swimmer of the Championship Meet. At the NCAA Championships, she scored FGCU’s first points at the meet, placing 12th in the 50-yard freestyle with a time of 22.12. Svensson also helped the Eagles earn their first ever points in a relay event when the 200-yard relay team touched the pads in a time of 1:37.55 to finish eighth. Svensson helped the Eagles finish a program-best 26th in the nation.

In 2014, Sarah Hansen (McKean, Pa./General McLane High School) was announced as FGCU’s NCAA Woman of the Year nominee after her tremendous four-year career with the women’s basketball program.

ABOUT US
The No.1 source for competitive swimming and diving in Florida. See our website for more info. Partners with UF Swim & Dive 🏊🏽🏊🏼‍♀️
Contact us: info@floridaswimnetwork.com
FOLLOW US
© Copyright 2017 - Florida Swim Network
MORE STORIES

Why You Need This Swimming Device For Your New Years Resolution